(Continued from Part I) 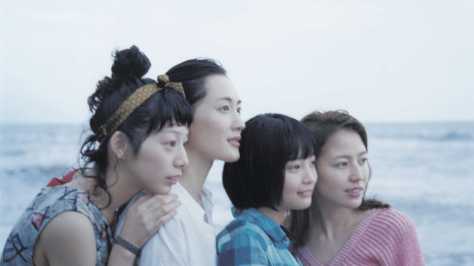 Family, food, love, work, life and sadly death are explored in Hirokazo Koreeda’s Our Little Sister, the unofficial successor to Kon Ichikawa’s masterpiece The Makioka Sisters. And yet it feels like the cinematic equivalent of warm pillow and chicken soup in all the right ways. This overpowering, daylight filled family drama from Hirokazu Kore-eda (Still Walking) overflows with little minutes and goes down effortlessly as the numerous meals we see our lead characters enjoy together. Koreeda gives us three sisters, Sachi (Haruka Ayase), Yoshino (Masami Nagasawa) and Chika (the monomonikered Kaho), all in their twenties, who meet their adolescent half sister, (Suzu Hirose), surprisingly at their alienated father’s memorial service. Promptly coexisting with this well adjusted, keen young lady, they welcome Suzu to the old family home in Kamakura that their father left 15 years before and where the three still live, together. Their compatibility and dependence on each other—and the pride with which they respect their new sister, in spite of her incidental uncovering of old feelings of disdain—is profoundly irresistible. Nonappearance is a topic: The mother of the three older sisters, has deserted them for a few years as well, and part of the force of Koreeda’s film lays on how he unobtrusively tracks each of the sister’s varying points of view on their parents. The past keeps on having an impact on their associations with the men and others in their lives. This is a delightful hug in movie form, it emanates happiness and concordance notwithstanding unfolding in the shadow of a father’s demise in the background of a broken family. Out of obscurity, Koreeda sparkles a light, and there’s a waiting appeal here that makes even the motion picture’s soppier minutes, (for example, when two characters bike through a road fixed with flawless cherry blooms) feel earned.

Like the movie discussed above, Kelly Reichardt’ s Certain Woman is another portrait of complex women in this startling triptych. Encompassing  three softly converging stories of various women in Montana it is supported by a top cast that includes Michelle Williams, Laura Dern, Kristen Stewart (quickly becoming a guarantee of a quality movie these days), and it cannot be understated that the film truly sparkles when amateur Lily Gladstone is on screen . A portmanteau made up of three stories connected by a specific setting and the shared inward existences of its female characters, ‘Certain Women’ feels like a rundown of American author chief Kelly Reichardt’s previous works.  It evokes the Midwestern scenes of ‘Meek’s Cutoff’, the throbbing forlornness of ‘Wendy and Lucy’ and the shaggy-whiskery of  ‘Old Joy’. Adapted from short stories by prizewinning author Maile Meloy, ‘Certain Women’ has a solid whiff of Raymond Carver about it: three sincerely coordinated stories of hardships and hope. ‘Certain Women’ moves, as every one of Reichardt’s movies do, at a slow pace, and a modest bunch of lived-in characters. In any case, it’s difficult to review a film with such an exact, immersive feeling of place. Not to mention the particular temperament that accompanies it: stunningly shot on celluloid in shades of cocoa and dark tones, the screen is loaded with sprawling reaches, immense skies, totally open prairies. The stories themselves are personal by examination, and it’s from this meeting of “little” lives and great vistas that ‘Certain Women’ draws its quality.

Based on a true story, in 1986, 5-year-old Saroo Brierley winds up as a stowaway on board  a train to Calcutta – 930 miles far from his home. A quarter century later, raised by an Australian couple, he embarks on a trip to find the mother he left behind and he scarcely knew. His instrument of decision: Google Earth. Brierley’s biography is the setup for a picturesque film, and Lion handles the life milestones without schmaltzing up the hardships. Davis parts the film in two, first catching the metropolitan bedlam from a diminutive POV, then grappling with a personal crisis in the present. Patel picks at a crude nerve as the present-day Brierley, dislodged yet determined towards finding closure, while Kidman conveys a stellar performance as his supportive foster mother. Thank heavens for the thoughtful soundtrack too.

Makoto Shinkai, the rising Japanese illustrator whose melancholic, hyper-immersed movies wed the fragile excellence of Hayao Miyazaki with the workaday thoughtfulness of Yasujirō Ozu, has dependably floated towards stories that happen in the space between individuals. Returning to subjects of yearning and partition that turned into his mark in movies, for example, 5 Centimeters Per Second (2007) and The Garden of Words (2013), Shinkai’s fifth and most accomplished piece has affirmed the filmmakers many skills, earning that title of “the new Miyazaki” as claimed by many film writers. However this exciting, often melancholy yet still uplifiting YA enterprise is particularly in its own class. It is as unique in relation to Miyazaki’s imperishable Studio Ghibli movies as it is from real life western cartoons. The body swap premise may recall for example, Freaky Friday, The Hot Chick and It’s a Boy Girl Thing but it shares most of its DNA  with Nobuhiko Ôbayashi’s 1982 Japanese hit, Tenkōsei. All through, Shinkai compares male and female, town and nation, science and superstition, over a significant time span. However, it’s in the nightfall twinkling of kataware doki, when night and day meet and universes old and new intermingle. It soon reveals that that the genuine heart of this story lies in it’s star crossed lovers saga. Like Chris Marker’s spearheading science fiction La jetée (which enlivened Terry Gilliam’s Twelve Monkeys), Your Name spirals richly towards a point where beginnings and closures get to be distinctly vague. However does as much in exploring loss and life as you’d find in a more pretentios arthouse film. Ultimately however, Your Name is one of the most beautifully realized coming of age stories and love stories to boot. That it happens to have many more cerebral layers going on, is just icing on the cake.

Underneath each social pattern, each economic or geopolitical move, there are individuals. In Mountains May Depart we follow a couple, or perhaps couples – a giddy Chinese lady, her commoner suitor, the mogul who charms her into marriage, and their child. The boy thinks about how he ended up in Australia without a single expression of Mandarin in his vocabulary. Together they float from 1999 to 2014 to 2025. Jia Zhangke packs his epic with giggling, bitterness, blasts, and quick arrangements. Each crucial minute excites and excites even more, mirroring a moment in time through the motion picture’s rearview mirror. The dramatization is altogether exacerbated by Zhao Tao, whose delicate grin has the oomph to pulverize a tank. Wherever you hail from, Mountains May Depart will address your reality, your time, your life – that is a guarantee.